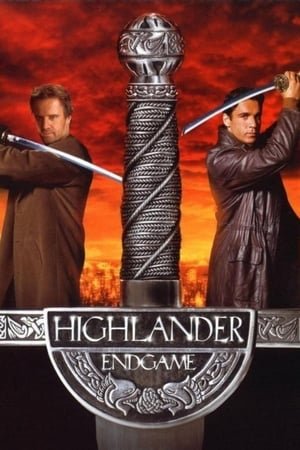 R 09/01/2000 Action and Fantasy 1hr 27min
It will take two immortals to defeat the ultimate evil. But in the end, there can be only one. Description

Immortals Connor and Duncan Macleod join forces against a man from Connor's distant past in the highlands of Scotland, Kell, an immensely powerful immortal who leads an army of equally powerful and deadly immortal swordsmen and assassins. No immortal alive has been able to defeat Kell yet, and neither Connor nor Duncan are skilled enough themselves to take him on and live. The two of them eventually come to one inevitable conclusion; one of them must die so that the combined power of both the Highlanders can bring down Kell for good. There can be only one... the question is, who will it be?

With endgame the old movies come to an end and the torch is passed on to Adrian Paul as the new Highlander. This is a natural transition as Adrian is leading the Highlander TV Series and I have a feeling that Cristopher Lambert was getting a bit tired of the franchise at this time.

As with the series Endgame started to explore the lore a bit and introduced new angles on what would later be a pretty extended lore in the Highlander universe. While the movie itself is not the best, it did introduce some new dimensions and stepped away from the sci-fi and fantasy versions from previous movies into a more mysterious version.

Overall this is the second best of the Highlander movies in my opinion.